Cross Fell is the highest mountain in the Pennines of Northern England and the highest point in England outside the Lake District. It is located in the North Pennines Area of Outstanding Natural Beauty. It lies within the county of Cumbria and the historic county boundaries of Cumberland.

The summit, at 893 metres (2,930 ft), is a stony plateau, part of a 7+3⁄4-mile-long (12.5-kilometre) ridge running north-west to south-east, which also incorporates Little Dun Fell at 842 metres (2,762 ft) and Great Dun Fell at 848 metres (2,782 ft). The three adjoining fells form an escarpment that rises steeply above the Eden Valley on its south-western side and drops off more gently on its north-eastern side towards the South Tyne and Tees Valleys.

Cross Fell summit is crowned by a cross-shaped dry-stone shelter. On a clear day there are excellent views from the summit across the Eden Valley to the mountains of the Lake District. On the northern side of Cross Fell there are also fine views across the Solway Firth to the Southern Uplands of Scotland.
The fell is prone to dense hill fog and fierce winds. A shrieking noise induced by the Helm Wind is a characteristic of the locality. It can be an inhospitable place for much of the year. In ancient times it was known as “Fiends Fell” and believed to be the haunt of evil spirits. St Augustine of Canterbury is said to have blessed the hill when he arrived here on his travels so it became known as Cross Fell in the Christian tradition, although it has been speculated[by whom?] that the fell became known as Cross Fell (“cross” meaning “angry”) because of the evil spirits. 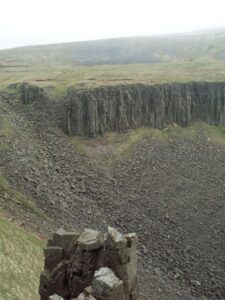