The town is located to the north of the River Derwent which forms the historic boundary between the North and East Ridings of Yorkshire. Facing Malton on the other side of the Derwent is Norton. The Karro Food Group (formerly known as Malton Bacon Factory), Malton bus station and Malton railway station are located in Norton-on-Derwent.

Malton is the local area’s commercial and retail centre. In the town centre there are small traditional independent shops and high street names. The market place has recently become a meeting area with a number of coffee bars and cafés opening all day to complement the public houses.

Malton has been described as “the food capital of Yorkshire”, and was voted one of the best places to live in Britain by The Sunday Times in both the 2017 and 2018 lists. 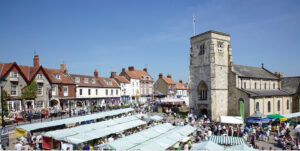